Yesterday, Monday, when five intensive days with Richie Hawtin and his crew were over we found out we were so high on it all. On life, music, love, township-love, surprising fun, a successful event, new motivation, inspirational people and great feedback.. Still, we were tired, and we knew this was the time for a litte break the two of us.

We have talked for long about going to one of S.A’s neighbouring countries, and I’ve always been keen on some desert trekking in Namibia as well as to see and feel how that country differs from S.A…

However, in the end we got convinced to go to Mozambique by more than one person and after reading a guidebook about it the last week I’ve become more and more curious about this country.

I’m obviously curious about any country in this region really, and would love to have more time (and money) to travel around discovering much more. But as we went to Jo-burg the last day of Richie’s tour, and that happens to be fairly close to Mozambique rather than to Namibia, and we found out these current days probably are the only one we will be on this side of the country for now, we decided to come to Mozambique.

After reading and talking to people we’ve also heard Mozambique is completely different to S.A and Namibia in so many ways; just starting with the country’s colony history and its heritage due to being Portuguese and not British or Dutch.

So, there we found ourselves on the hotel bed with sore feets late Monday night; in a typical V&J style: happy after finally taking a decision, ruined by having purchased the flight tickets way too last minute, nervous and delighted with the first malaria pill placed in the stomach.

Of we went early morning.

This is what first waited us when getting of the plane:

The smallest airport we’ve ever seen in life.

As we had not researched shit, we found out upon arrival that Mozambique requires VISA. They did of course not accept bank cards and we did of course not have enough cash – of any currency – so our first adventure was to get a taxi driver to take us back and forth to an ATM so that we could pay the freaking VISA.

Just the way I love starting an impulsive holiday really. 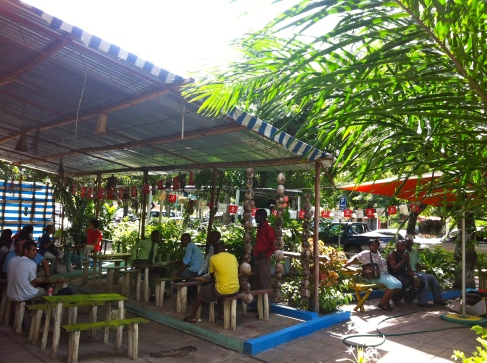 This picture is from the first local bar we saw in the street were we took out money, but actually I took it due to the coconuts hanging everywhere – just like that –, a simple, yet so beautiful reality that …yeah.. makes me nuts because I LOVE coconuts… And they love my camera here in Mozam it seems. They are everywhere!

Unfortunately I didn’t dare to take a picture of our driver, but he was amazing! He spoke three words English so our conversations were held in Portanyol – a good mix of Portuguese and Spanish – and we bonded instantly. He was super cute, a typical mellizo mix as they call it in South America, of white colonizers and brown or black indigenous people. This privilege had given him features like a black person but with golden coloured skin and red afro hair as well as cute freckles. Argh! Why didn’t I take that picture?

Anyway, he got us safe and sound back and forth to the airport, and then all the way to Tofo where our already booked 4 star romantic hotel (that we surprised ourselves by having managed to book and that we felt we deserved)..

Here’s mr. Valo by the computer that we unfortunately already had to take out as we unfortunately have some work although we’ve agreed this is a small holiday in between the crazy BfM events, in which we deserve to chill. The hotel however, has a very good WIFI connection (something that is not too common in Tofu) and that makes it all easier as sending a couple of emails and blogging goes smoothly.

But now, my friends it is time to go for a swim.

I’m thrilled by our view, this hotel and its romance potentials and I’m also thrilled as I’ve just chugged in to this little treasure

and feel so damn happy to just be somewhere far away, and so very different than what we expected. We actually think we are in a state of culture shock and already laugh at people calling South Africa Africa…

Now, we must remember that Africa is a continent and people tend to forget all the beautiful and varied cultures, religions, histories and countries that are mashed together over a vast area. Even I. And today, when we arrived here in Mozambique, I really giggled to myself. “This is Africa, baby… and townships? Informal settlements? Uhm, Ive hardly seen anything part form that between the airport and the city, then again on the way to Tofo – a tiny and beautiful but so worn out – village.

Apparently there are many things yet to discover for a naive Northern European like myself. Even with a recent delivered Masters in freaking tourism… I’m open to learn, realise, understand. More. 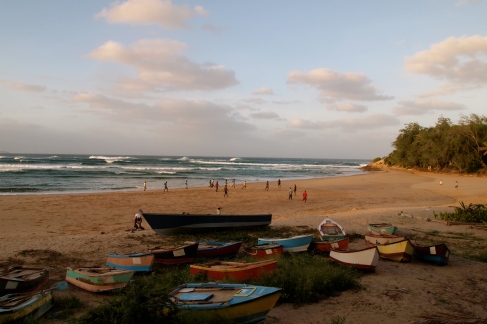 Search for a topic